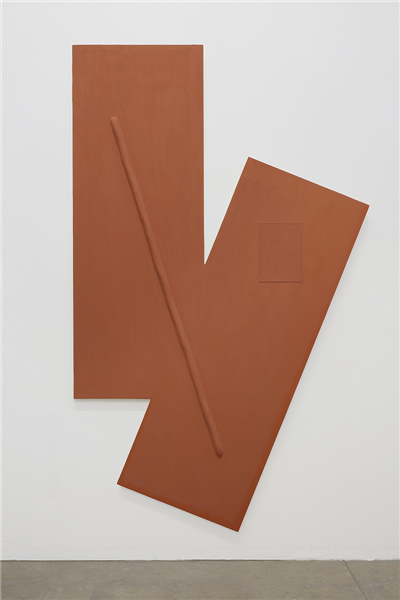 James Fuentes is pleased to inaugurate our newly expanded gallery at 55 Delancey Street with an exhibition of new work by Noam Rappaport.

In the exhibition, Rappaport continues his focus on wall-based works that operate between painting, sculpture and drawing. Using a palette drawn from the constantly regenerating constructed landscape of Southern California, his application of color varies in saturation and ranges from subtle landscape influenced tones, to high-pitched hues of popular graphics.

The predominant format of the works explores two or more merged rectangles. In the larger shaped canvases, the meeting of these two geometric forms - perhaps each suggesting figures, ideas or elements of landscape - create an opportunity for the artist to interpret the space where these forms come together. Rappaport uses this framework to investigate the 'in-between' areas of his compositions, occupying them with cut-outs, raised graphic lines, nebulous rings, marks in relief, hard-edged rectangles and collected strokes varying from incidental to semi-purposeful. Painted or sculpted forms, placed at the meeting points of the rectangles, embody the idea of potential in a point of encounter.

Born in 1974, Noam Rappaport received a BFA from the School of Visual Arts, New York in 1997. He joined James Fuentes in 2011 and had his first solo exhibition at the gallery in 2012.